I am going to take advantage of my personal page here to speak about the illogical amounts of hate thrown at me for “The List”. First and foremost… if you are going to shit hate all over the FREE story that you got to read because of my need to express myself and tell a story, at least have the courage to log in and sign your name to the flame you feel the need to roast me with. You don’t like the story I chose to tell? FINE! I really don’t care if you like it or not. But here’s an idea… if you don’t like it, don’t read it.

As I have said previously, I was inspired by an episode of “Friends”. I liked the idea of friends sitting around talking about who would make their “fantasy celebrity sex” list. Granted, I took it a little further and delved into Sookie’s character, making her someone who initially wouldn’t even make a list, much less someone who would cheat on her boyfriend. And she never does, based on an understanding between herself and Sam when they started seeing each other exclusively. I covered that in at least 2, if not 3, chapters. Anyone who (either anonymously or not) calls this Sookie a cheater or a slut OBVIOUSLY didn’t pay much attention to the story or the dialogue between the characters.

Second – I love how I’m getting blamed for being misleading because certain readers chose to ignore blatant facts about the characters that I didn’t veil or hide at all. Eric: young celebrity, single, not searching for any kind of relationship, loves his career, and is very physically attracted to his rental agent. Sookie: young professional, has a boyfriend, loves her job and hometown, and is very physically attracted to one of her renters. Once Sam gets himself taken out of the story, neither Sookie nor Eric had any kind of overwhelming urge to completely uproot their stable lives for the other. What they decided was to take advantage of the time Eric was in the same area and enjoy the benefits of said attraction. Never once did I try to build it up to be anything more than that. Neither one admitted to others (or the readers in their unspoken thoughts) a deeper feeling than sexual attraction. If certain readers CHOSE to overlook the clearly stated facts, I don’t see how I can be blamed for their own obliviousness.

Third: I brought Godric in for a very specific purpose. To use another “Friends” reference, he’s Sookie’s lobster. He’s the one that got away when they were in college. Eric is the only person she’s had sex with that she didn’t have a committed relationship with. Godric returning to her life brought her back to reality and out of the fantasy that she had with Eric. If you look over the chapter while Eric was doing his publicity tour and Sookie was talking to her girlfriends, they bring up multiple times that Sookie is not the kind of girl to have a fling; she has commitments. Her “thing” with Eric was out of her norm and her girls didn’t want her to get hurt because of it.

Bringing Godric in gave Sookie something back that she lost years earlier. I know how she felt perfectly, if in a different way. When I was waitressing the summer after college, imagine my shock when I saw my ex walking down the street through the window when I thought he was in Massachusetts. He was the son-of-a-preacher-man stoner frat boy who was always well-stocked with pot that graduated before me. He was tall and lanky with crazy curly blond hair and dark green eyes. I wanted be true to my mental vision of Godric, so I changed some of the physical traits, but that’s it. However, the reaction to seeing each other for the first time on a random street – me in my tiny waitress uniform and him in his usual t-shirt and jeans – was faithful. In my case, the relationship didn’t last, but who’s to say that it would be that way for Sookie? I would be the LAST person to begrudge her having some summer fun with a sexy famous Swede, but knowing that it was a limited engagement made it easy for her to end their fling to start something more stable with her Godric. Hating on me because certain readers (again) chose to overlook clearly stated facts is simply disappointing.

Finally… I don’t think anyone reading this would have been one of the ones to leave one of those hateful unsigned reviews. Many of those threatened to never read anything I ever wrote again, so if you DO happen to be one of those cowards, I can now call you a liar. *neener neener* I’m hoping that if you follow me, you can understand my motivations in telling the story I did, even if you didn’t love the way I ended it. To be fair, this is the ONLY story I’ve written (out of 18) where Sookie and Eric didn’t end together. I don’t count “What the Hell” because that’s being continued in a sequel. So, I am going to do what has been told to me by several people, all of whom have read the story in question, and shake off the hate and continue writing what I like and tell the story I want. Honestly, if no one is paying me in anything but comments and critiques, why shouldn’t I? But here’s an idea. Since the reader isn’t spending anything other their time reading the drivel that spews out of my head, why be needlessly cruel to the person who spewed said drivel? I’m not pulling a “Clockwork Orange” and prying their eyelids open and forcing them to read the words. I can understand voicing disappointment over certain details. But, honestly, only 3 reviewers know me personally, so hurtful comments about me as a person have nothing to do with me as a writer and have no place in reviews.

To both the anonymous and signed reviewers that called me a Charlaine Harris wannabe… hmm… Well, look back a couple of posts and see that, while I would have liked to see Eric and Sookie together at the end of DEA, I didn’t hate the book. However, the comparison isn’t fair or accurate. I didn’t spend 12 books building up a relationship that started with mere curiosity. Never once did MY Eric and Sookie ever say that they loved each other. Never once did Eric and Sookie commit to more than some truly awesome sex for a limited amount of time. Never once did either give up anything for the other. If the only basis for comparison is the fact that she ended up with someone other than Eric… well, again, it’s not MY fault that blatant obvious facts were ignored.

Last thought… if you liked The List, thank you. Even more if you left a review saying so. I won’t lie and say that my confidence wasn’t shaken by the sheer amount of hate that was spewed at me for simply telling a story that I had a lot of fun writing. Fortunately, I have some very good friends, and you know who you are, who have convinced me to shake it off because I’m better than the cowards that shit hate over a creative work that they didn’t appreciate. So I will persevere, to be a little overly dramatic. I will continue writing when I have time and feel inspiration. And for reading my rant, enjoy the eye candy below… 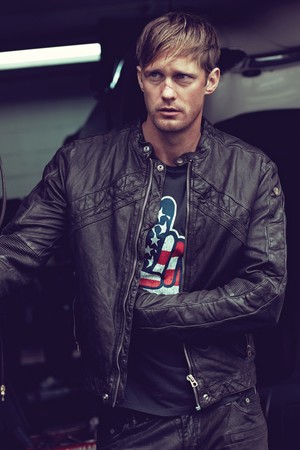 By the way… who else excited for Sunday and pretty clearly the final season of “True Blood”? I’m feeling cheated because my local B&N is carrying the EW with supid “Dexter” on the cover.